Can always use Black Magic, Time Magic and Dark skills.

Alicetroemeria is a totally normal human mage who joins the party to help Luka defeat evil.

Alicetroemeria is recruitable only on the Alice route, being mutually exclusive with Heinrich. After you meet these two in the world beyond the fourth Tartarus, you will be told to return to Grand Noah to fend off the monster invasion there. Alicetroemeria will tag along and automatically joins the party.

Alicetromeria is a traveling mage accompanying Heinrich to beat Monster Lord Black Alice. Unknown to him she is Black Alice in disguise. She is first seen at Succubus Village set 500 years ago, during Heinrich's quest to defeat the Monster Lord, and appears after Luka defeats Lilith and Lilim.

Alice/Ilias warns the party to approach Heinrich and the mage carefully as they recognize the mage as Black Alice. On the Alice route she is accidently dragged by Luka's Harpy Feather into his party when they come back to defend the four kingdoms against the attacks of the Monster Lord's armies.

Alicetroemeria join them "as a gift to a descendant", making it clear she's mostly aware of the reality of her predicament. In the process she also learns information about a Black Alice in Luka's world causing havoc after the Queen Elf is defeated, when they learn that Queen Alraune has been brainwashed by Azi Dahaka.

When it is revealed that the blue orb needed to awaken the Garuda Girl was destroyed, she helps the party get the orb located in the Monster Lord's Castle at the time of Black Alice. She persuades the major of Succubus Village back in her era to let them have the boat to go to Hellgondo.

After getting through the cave there, they make a quick stop at a shrine where the priest seems delirious. The next morning Lilith and Lilim come back with the intent to take their revenge, but are persuaded to join the party by Black Alice. She helps Luka defeat the Three Nobles of Black and get the blue orb.

She reappears in the Collaboration Scenario to help out Alice and Luka when the heroes face the Succubus Prison Trio and the Cursed Sword Sisters. She makes another appearance during the 7 trials of Myusca in Finoa as one of the girls trying to get Luka for himself in an all out battle royale.

On the Ilias route she does not join Luka, instead Heinrich joins the party.

Should the player decide to face Black Alice in the Monster Lord Castle, she will temporarily "excuse herself" from the group. She then can be fought as a Monster Lord, and will be back in the Pocket Castle and ready to join the team as soon as Luka leaves the area.

Ilias: "Black Alice...! It's useless to tell me that you've entered the heart of the hero Heinrich! Heinrich will slay you in the future! This future event has been defined!"

Alicetroemeria: "If that's true, then why aren't you smiling...? If Heinrich were to defeat me, shouldn't you be showing more of a smile?"

Alicetroemeria: "What, was there something inconvenient with that? What on earth did Heinrich do..?"

Alice: You... Why in the world did you conceal your identity and accompany Heinrich?

Alicetromeria: Ufufu, We are incompatible people walking the same path... Don't you think that is interesting?

Alice: So what have you gotten out of it? Did you get to experience what you wanted...?

Cassandra: "I have admired you ever since I was little... Ah, can I please have your autograph?"

Alicetroemeria: "Would it be fine if Beary signed it? ... here you go."

Cassandra: "Ah, wonderful... I shall keep this as a treasure of the Nereneid family..."

Emily: "Hey, Mother... What's this fancy cardboard with the word "Beary" on it? The handwriting is messy, can I throw it away?"

Cassandra: "YOU MUST NOT!"

Heinrich: "This time, we're going to be adventuring together in another world... It's a very strange destiny, Alicetroemeria."

Alicetroemeria: "Ufufu, it's wonderful... wherever we go, we shall conquer it together."

Heinrich: "Ah! We'll fight together to the bitter end!"

Alicetroemeria: "Lilith, Lilim, what do you think of this world? Don't you think its a lot of fun...?"

Lilith: "Yes, Alicetroemeria... Its as if I've wandered into a wonderland..."

Lilim: "But Alicetroemeria... will there not be a party in this world...?"

Alicetroemeria: "I'm already in the midst of a grand party. Lets enjoy ourselves in this world..."

Lilim: "Lets have a wonderful event with lots of pleasure..."

Titania: "Aren't you a Monster Lord? Why do you look like a magician?

Alicetromeria: This is my first time camping with so many people. How about a dare? Shall we sing and dance together?

She is required in the "Stage of Darkness" scene.

Alicetroemeria is thinking about evil things...

Alicetroemeria: “So, in the castle... was it delicious?”

Alicetroemeria is having a conversation with Beary...

Alicetroemeria: “Oh my, Beary ate... No, Beary discovered this.” 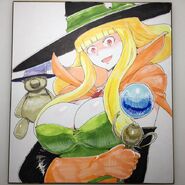 Drawn by Setouchi
Community content is available under CC-BY-SA unless otherwise noted.